Auston Matthews doesn’t think of himself as anyone’s savior. The No. 1 overall pick in the 2016  NHL Draft describes himself as an impact player for the Toronto Maple Leafs, a team who hasn’t seen a Stanley Cup since 1967. “Hockey is a team game, so there’s really no savior,’’ Matthews said. “I’m an impact player and I believe I can be a franchise center man. That’s my ultimate goal.”

The love of the game came early for Auston, who attended his first hockey game at the tender age of two. As a toddler, Matthews’ father Brian and his uncle Billy took him to Arizona Coyotes games, where he fell in love with hockey. Although he played baseball for a time, hockey was in his blood, and there was no turning back. “I don’t remember much; I was so young,’’ Matthews said of watching his first NHL game. “I just remember it being extremely loud. I remember thinking what a fast-paced game it was. I just found the game was very intriguing.’’ Brian Matthews said baseball didn’t move fast enough for Auston to stay interested. “I think he loved baseball. But there was too much standing around for him. If he could have batted every 15 seconds he would have loved it. Waiting around for the pitcher to throw the ball, it wasn’t active enough for him.” 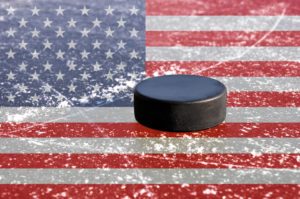 Matthews made his presence known on the ice from the beginning, scoring four goals in his NHL debut for the Toronto Maple Leafs, but he may never have had the opportunity if a broken femur suffered in while playing in his second game for USA Hockey’s Under-17 National Team had sidelined him for good. The serious injury required surgery, but Auston says it made him “stronger mentally.”

Auston is thankful for the support of his family, including mother Ema, who worked multiple jobs to help finance his hockey activities, and even moved to Europe with his older sister to help Auston adjust to life when he played professionally for one season in Switzerland while waiting to become eligible for the NHL Draft.

Matthews says his goal is to make his team better, and get better each day, going forward. Since Auston is just the fourth player in the last 30 years to score four goals in a game before turning 20 and he has led the Maple Leafs to the playoffs, we think he’s off to a great start.